Riccardo Muti, the King of Verdi, Still Rules With a Firm Baton 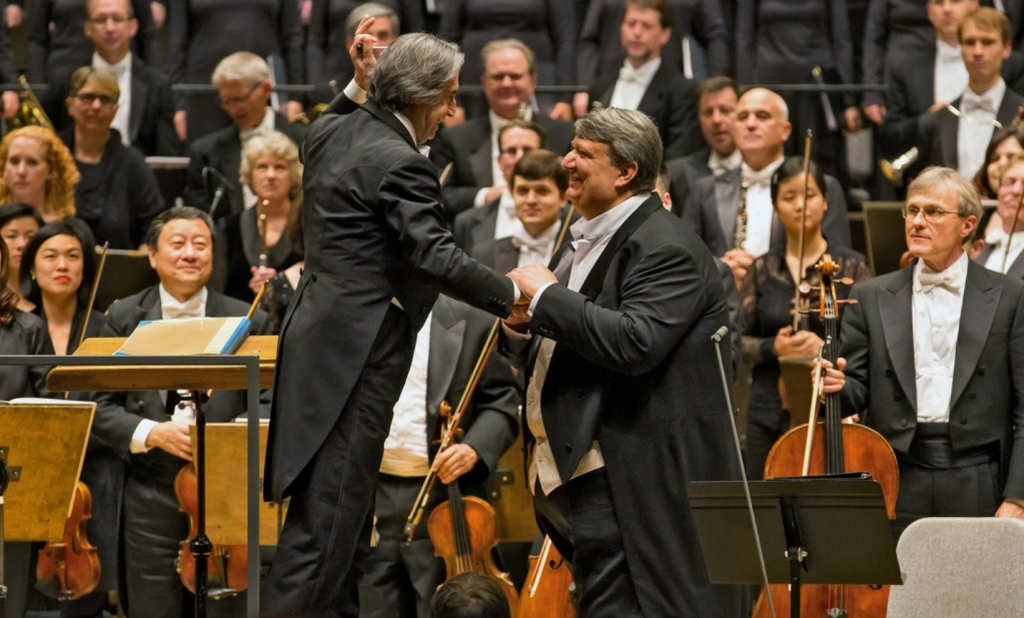 Riccardo Muti, left, congratulating Ambrogio Maestri for his performance in “Falstaff”
with the Chicago Symphony Orchestra.

Riccardo Muti, the King of Verdi, Still Rules With a Firm Baton – from The New York Times

CHICAGO — For more than 40 years, Riccardo Muti has been the king of Verdi conductors, the one who most makes you feel you are hearing the composer’s operas for the very first time.

At 74, and less than three months after hip surgery, Mr. Muti showed no sign on Thursday that he was interested in giving up the crown, hopping on the podium as he led his Chicago Symphony Orchestra in an energetic yet elegant, altogether sublime concert performance of “Falstaff,” Verdi’s operatic farewell. As clean and crisp as fresh linen, it repeats here on Saturday and Tuesday at Orchestra Hall. (Audience members on Saturday can savor the knowledge that Shakespeare, the creator of its source material, died 400 years ago that day.)

Mr. Muti’s gift is to clear away clutter. In the decades after the composer’s death in 1901, performances of Verdi’s operas began to fester with the most aggressive excesses of the verismo style that was gaining steam in his final years. Singers mugged and sobbed onstage; high notes were thrown in, even if they made little musical sense. The works were treated like cheap potboilers, subjected to the kinds of cuts, interpolations and fudgings unthinkable in Mozart, Beethoven or Wagner.

Some resisted this trend: Arturo Toscanini, for one, was a notorious stickler for observing the letter of the score. If Verdi wrote a dotted quarter note followed by an eighth note, woe to you if you were to sing it as two quarter notes, or if you were to milk the dotted rhythm for lazy effect.

Mr. Muti — who, as the student of Toscanini’s student, is something of his artistic grandchild — has been on the front lines of this battle in our time. It hasn’t always been an easy fight: In 2000, when he refused to let a tenor cap an aria in “Il Trovatore” with an unwritten but traditional high C, the audience in Milan erupted in boos.

But his approach doesn’t rely just on removing gratuitous high notes. It’s more about trusting the music and focusing on its meaning, allowing it to support the words, to tell the story. Mr. Muti has shown, time and again, that Verdi’s settings of texts are hardly less responsive and refined than the French Baroque “tragédies en musique” of Lully and Rameau.

To hear this conductor in this repertory is like looking out a newly cleaned window: Over the months or years, you may have gotten used to the thin film of grime, but now everything is brighter, sharper. Sometimes overly so: He has led performances that felt too controlled and driven, with ferocious loyalty to the score not leaving sufficient room for a sense of spontaneity, even humanity.

But “Falstaff” simply sparkled. It is the culmination of Mr. Muti’s cycle with the Chicago Symphony of the three operas that Verdi adapted from Shakespeare, two of them with his most important librettist, Arrigo Boito. New Yorkers may well remember the “Otello” this orchestra brought to Carnegie Hall in 2011: I’ll never forget it. Mr. Muti made the work a long, feverish convulsion, unfolding with unrelenting intensity. Certain instrumental lines unexpectedly stabbed out of the larger textures, like premonitions of the murder to come.

Along with other early Verdi works, “Macbeth” was long dismissed as a surfeit of oompah music, but here in Chicago in 2013, Mr. Muti revealed its moody nuances. It marched inexorably forward, its grim energy matching its protagonist’s desperate ambitions.

“Falstaff” also never stops moving, its almost ceaseless action sometimes joyful, sometimes rueful, sometimes frantic. The key is to dance nimbly among these rapidly shifting moods, and no one is as spry a leader as Mr. Muti. As much as it accompanies the singers, the “Falstaff” orchestra converses with them, and on Thursday its responses — a golden brass exhalation here; an exclamation point in the low strings there; birdlike twitters of flute and oboe punctuating a rapid-fire dialogue — had unstinting comic timing. A full symphonic ensemble moved like a chamber group, as if a Mack truck were turning curves like a Maserati.

Fifteen years ago, Mr. Muti taught Falstaff to a young baritone named Ambrogio Maestri, whose hulking physique made him a natural for the part. Mr. Maestri has since become the world’s leading Sir John, singing the role in a new production at the Metropolitan Opera in 2013 and more than 200 times elsewhere.

But has his relish in the words ever been as luscious as on Thursday, his wit as sophisticated? Mr. Muti tolerates no overplaying, and Mr. Maestri here won with restraint, making the audience crack up at just the slight, randy lilt he gave a single word — “parla” (“speak”) — in the first scene of the second act. His wounded monologue at the start of Act III had the emotional range one usually expects more from the beleaguered Ford, here sung by the confident baritone Luca Salsi.

There was smiling intimacy and agility in the interplay among the four women who plot Falstaff’s humiliation, including Mistress Quickly (the rangy toned, unusually youthful mezzo Daniela Barcellona) and Meg Page (the mezzo Laura Polverelli). Sung by the soprano Eleonora Buratto, her tone lucid and suave from crystalline top to chocolaty bottom, Alice Ford — the voice of stylish wisdom — was as much the star as Falstaff.

Verdi and Boito conceived the young lovers, Fenton (the gentle tenor Saimir Pirgu) and Nannetta (gorgeously sung by the fresh, pure-voiced soprano Rosa Feola), as a joint oasis amid all the agitation. Mr. Muti rendered their duets as safe spaces of lyrical expansion, without the pace ever seeming to flag

The grand fugue that ends the opera begins “The whole world is a joke,” and is generally played for its good-natured hilarity. But Mr. Muti made it hard, severe, a little painful. After all, “Tutto nel mondo è burla” isn’t an entirely happy moral. If the world is a joke, that doesn’t simply mean it’s funny; it could also means it’s cruel, even an illusion.

It was a bracing finale, but somehow it increased the building, breathless exhilaration of the performance rather than curbing it. Adroitly poised between sincerity and mockery, laughter and tears, this eloquent “Falstaff” is a triumph for Mr. Muti. Long live the king.

A music review on Saturday about a concert performance of Verdi’s opera “Falstaff,” by the Chicago Symphony Orchestra at Orchestra Hall in Chicago, misstated the number of operas that Verdi adapted from Shakespeare with the librettist Arrigo Boito. It is two, not three.