Riccardo Muti leading the Chicago Symphony Orchestra, whose players voted on Saturday to end
the longest strike in the orchestra’s 128-year history.
Hiroyuki Ito for The New York Times

The longest strike in the Chicago Symphony Orchestra’s 128-year history ended Saturday, when the orchestra’s musicians and board agreed to a new contract that will shift the players from their defined-benefit pension to a defined-contribution plan, similar to a 401(k).

The proposed change to the pension plan was the major sticking point in a musicians’ strike that lasted nearly seven weeks. The deal was brokered with the help of Chicago’s mayor, Rahm Emanuel, who had called the players’ union and the orchestra’s management to his office on Friday to try to break the stalemate.

The orchestra’s management had said that the existing pension plan, which guaranteed the players a set amount in retirement, had grown too costly. The players countered that the proposed alternative, in which the orchestra would put a set amount of money into individual retirement accounts, would shift investment risk to the musicians.

The two sides came up with a compromise. The orchestra’s management said that when current players switch to the new defined-contribution plan and agree to invest their retirement accounts prudently, the orchestra will guarantee that their benefits at retirement will be the same as what they would have earned under the old pension plan, which is being frozen.

That guarantee will not be available to new players: Those hired after July 1, 2020, will immediately move into the new plan, in which 7.5 percent of their base salary will be placed into retirement accounts.

The strike attracted the attention of orchestras nationwide, which have been under pressure to curb expenses, especially during contract negotiations with their unions. While defined-benefit pensions have grown rarer in the private sector, they are still the norm among the nation’s leading orchestras. So musicians from around the country watched closely to see whether the Chicago players would succeed in protecting theirs.

The musicians’ union said in a statement that the new deal “preserves guaranteed minimum retirement benefits for current musicians and commits the parties to study options for providing retirement security for new hires.” In the past, unions have been loath to accept contract changes that would protect current workers at the expense of new hires, fearing that such deals would create two tiers of workers in the same orchestra.

The strike was also notable for the unusual involvement of the orchestra’s revered music director, Riccardo Muti, since conductors usually avoid seeming to take sides in labor disputes. But before the strike began, Mr. Muti wrote to the orchestra’s board and management, saying, “I am with the musicians,” and he later appeared with the players on the picket line.

While Mr. Muti publicly insisted that he simply wanted the management and the board to “listen more carefully to the needs of musicians who represent one of the greatest orchestras in the world,” the symbolism was hard to miss. He is scheduled to return to the orchestra’s podium this week, which added pressure on both sides to reach an agreement.

Steve Lester, a bassist in the orchestra who was the chairman of the musicians’ negotiating committee, said in a statement that “after about a year of negotiations, we are victorious in our efforts by protecting and maintaining our secure retirement and gaining lost ground on our annual salaries.”

Helen Zell, the chairwoman of the orchestra’s board, said in a statement that the new agreement “ensures that the musicians receive the outstanding compensation they deserve” while securing the orchestra’s “long-term financial sustainability through the retirement plan transition.”

The biggest news from Thursday evening’s Chicago Symphony Orchestra concert is that the event took place at all.

After a seven-week strike, the orchestra returned to Orchestra Hall for the first time following the management and musicians signing a new labor agreement last weekend with the intervention of Mayor Rahm Emanuel. And the audience was clearly glad to see the ensemble back.

A homemade sign with the words, “Welcome Home,” hung briefly over the side of the balcony above the stage. And when the lights brightened above the stage signaling the imminent start of the concert, applause and cheers began, growing in intensity as concertmaster Robert Chen came out to take his bow.

More cheers and a partial standing ovation greeted music director Riccardo Muti when he took the stage. He launched the orchestra into a performance of “The Star-Spangled Banner,” which it usually plays at the start of each season, but this concert felt like a kind of new beginning and the gesture seemed appropriate.

Beyond the much-anticipated restart of the 2018-19 season, Thursday’s program was marked with some other notable milestones and historical connections. First off, two of the featured composers, Georges Bizet and Hector Berlioz, were both winners of the much-coveted Prix de Rome competition.

In January 1926, Ottorino Respighi traveled to Chicago to serve as soloist in his then-new piano concerto and to lead performances of his now-celebrated symphonic poem, “Pines of Rome,” just days after its American premiere in New York under Arturo Toscanini.

Thursday evening opened with the Chicago Symphony’s first complete performance of Bizet’s “Roma” since 1894, a bizarrely long time considering the innate appeal of this overlooked early suite, which the composer began writing in his early 20s during his residency in Rome. (Muti has a knack for musical rediscoveries like this.)

Like “Pines of Rome,” which concluded the concert, “Roma” offered the ideal festive spirit for this reprisal of the season, with its rich orchestrations, fetching harmonies and scene-setting imagery. This was easy-listening in the best sense of the term.

Muti and the orchestra brought an appropriately light, relaxed feel to this music, delivering apt doses of gentleness during the pastoral sections and rhythmic thrust in the more upbeat moments, including plenty of snap and sparkle in the lively second movement. Deserving special note were principal clarinetist Stephen Williamson’s handsome solos sprinkled throughout and the exuberant French horn calls in the first movement. 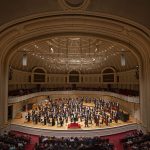 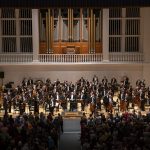 Mozart Overture to The Marriage of Figaro
Mozart Piano Concerto No. 20
Stravinsky Apollon musagète
Stravinsky Suite from The Firebird