October 2018 – At a ceremony in Tokyo on October 23, His Imperial Highness Prince Hitachi, honorary patron of the Japan Art Association, paid homage to the winners of the organization’s 2018 Praemium Imperiale International Arts Award.

Before the awards ceremony, a special reception to commemorate the 30th anniversary of the Praemium Imperiale was held on the same day in the presence of Their Majesties the Emperor and Empress and HIH Prince and Princess Hitachi.

Now in its 30th year, the Praemium Imperiale is the world’s most prestigious international prize in the fields of Painting, Sculpture, Architecture, Music, and Theatre/Film. It has become a powerful voice for the importance of culture in today’s world, bringing international attention to the arts in much the same way as the Nobel Prize brings attention to the sciences.

The Praemium Imperiale was created in 1988 to commemorate the 100th anniversary of the Japan Art Association and to honor the late Prince Takamatsu, who was the Association’s honorary patron for almost six decades. The Association chooses the winners based on the recommendations of individual International Advisors in England, France, Italy, Germany, Japan and the United States. Each advisor is guided by the recommendations of a nominating committee comprising cultural leaders from his home country.  The International Advisors are leading figures with a deep interest or involvement in the arts.

Among this year’s laureates, Riccardo Muti was mentioned underlining the fact that he is considered: “Maestro among Maestros” and that his contribution on Verdi’s operas is historic:

With his prestigious goals as a conductor, Riccardo Muti is considered “The Maestro among Maestros”. He conducted the most important orchestras in the world. His contribution, in particular to Verdi’s operas, is historic. His exceptional “Roads of Frienship” project, aiming at connecting different people through concerts, has been carried on and appreciated for 20 years. Furthermore, the “Italian Opera Academy” he founded for the support of young conductors and opera singers deserves praise.

Muti expressed his happiness and pride for this award, because “it comes from the Imperial Family”:

Today we met Their Majesties the Emperor and Empress, who have been extremely kind and well informed about my work. I deeply love Japan. I find it an extraordinary Country, with such a culture and social discipline that should be a reference point for many Countries in the world. Therefore this award means even more to me, as it comes from a land whom I greatly respect, whom I love and where I’ve been conducting many concerts and operas for a unique and extraordinary audience since 1975. 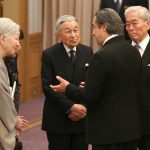 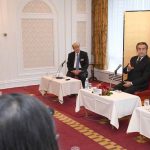 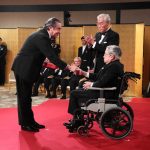 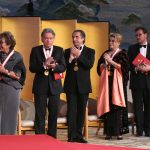 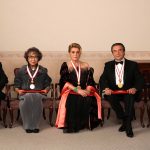 Special meeting to celebrate the 30th anniversary of Praemium Imperiale. HM the Emperor Akihito with HM the Empress. Behind them, from the left: Catherine Deneuve, Riccardo Muti, Christian de Portzamparc and Fujiko Nakaya. ©The Japan Art Association/The Sankei Shimbun

Muti was presented the Praemium Imperiale

Riccardo Muti, Music Director of the Chicago Symphony Orchestra, was one of five honourees to receive Japan’s Praemium Imperiale award from His Imperial Highness Prince Hitachi at an October 23 ceremony in Tokyo.

Muti expressed his joy and pride to receive the award «because it comes from the imperial family.» «Today, – he added – I met the Emperor and the Empress, who were extremely gracious and perfectly informed of my activities. I love Japan very much. I find it to be a truly amazing country, with a culture and a social discipline that should be a point of reference for many countries in the world. This is why this award means so much to me—it comes from a country that I respect, that I love, and in which, since 1975, I have performed many times for this unique and extraordinary audience.»

His Imperial Highness Prince Hitachi, honorary patron of the Japan Art Association, presented each of the honorees with a specially-designed gold medal and a check for 15 million yen (approximately $136,000) at the event. Prior to the ceremony, a special reception commemorating the 30 th anniversary of the Praemium Imperiale was held in the presence of Their Majesties the Emperor and Empress and His Imperial Highness Prince and Princess Hitachi.

The recognition for Muti comes after receiving the Japanese government’s prestigious Order of the Rising Sun, Gold and Silver Star decoration in 2016 for his contributions to promote cultural exchange and mutual understanding between the citizens of Japan and Italy through music. In 2016, Muti led performances at the Tokyo Spring Festival marking the conductor’s 150th performance in Japan, and also the 150th anniversary of the beginning of diplomatic relations between Japan and Italy, an occasion that was also observed with the creation of a commemorative stamp celebrating these milestones.

Muti also led the Chicago Symphony Orchestra (CSO) on a highly successful 10-concert Asia Tour in 2016, which included sold-out performances at Tokyo’s Bunka Kaikan. Muti and the CSO return to Japan for performances in both Tokyo and Osaka as part of 11-concert Asia Tour from January 19 to February 4, 2019. Muti also brings his Italian Opera Academy to Tokyo in March 2019.