“Music brings people together,” conductor Riccardo Muti noted in a short platform speech before the encore.

To be more specific, it had brought, that evening, just as it had for the past seven years, a diaspora of Australian expat musicians drawn from about 35 orchestras, in Europe, the UK, the US, Asia and Australia as the Australian World Orchestra, a kind of music camp for adults, or, as Simone Young put it, “the Australian Youth Orchestra with wrinkles”.

The project is not just about gathering the harvest but also sowing the seeds. Those who have made it also work with those young people who will make it through a series of master classes, outreach programs and the AWO Academy. It is a venture that has captured the imagination of the world’s leading conductors and this year was a chance to welcome back Riccardo Muti, who last graced the Opera House podium in the Olympic Arts Festival in 2000.

Muti’s approach to Brahms’ Symphony No.2 in D major, Opus 73, eschewed ephemeral accents, agitations and transitory moments of excitement in favour of a magisterial unfolding of the work’s essence and architecture. The opening of the first movement was an awakening through smooth, undisturbed quiet, leading to a finely phrased second theme. The pace disciplined but supremely unhurried, allowing the freshness of Brahms’ orchestral combinations to emerge with discreet, almost underplayed refinement. The slow movement was also drawn out, perhaps overly, leaving it to the third movement to discover moments of quicksilver lightness and gracefully shaped subtly, before the finale opened out to the full blaze of the day.

A particular highlight was the budding richness of Ben Jacks’ horn solo (SSO) at the start and in the first movement’s coda. More broadly, the orchestral sound was notable for fine balance, rich unanimity of strings led by Natalie Chee (SWR Symphony Orchestra Stuttgart), understated refinement in the wind and blended wholeness in the brass.

In Tchaikovsky’s Symphony No.4 in F minor, classical reserve was put aside to allow the phrases to fret, surge, and blaze with a finely assertive edge to the trumpets in the fateful opening motive. The openly romantic expressiveness from the strings (led by Daniel Dodds, Lucerne Festival Strings) of the first movement never clouded clarity of idea.

Oboist Nick Deutsch (ANAM) played the second movement solo with meticulous care and characterful colour, while the pizzicato third movement created glimmering delight in its hushed breathlessness. The unbridled pace of the finale provided a chance for the orchestra to display impressive unanimity and incendiary intensity at the close.

The encore, the Overture to Verdi’s Nabucco, with its great hymn of Italian unification, Va Pensiero, also recalled Italy’s ongoing gift to Australian culture, through migration, kinship of spirit and through music. 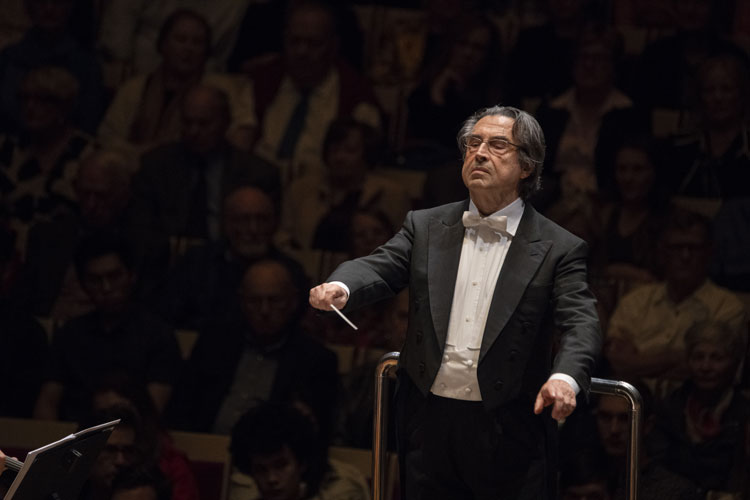 RICCARDO MUTI (AUSTRALIAN WORLD ORCHESTRA): An exhilarating concert and an eloquent reassurance of the eminent place of Australian musicians in the world.

Riccardo Muti has been cutting a (very elegant) swathe through concert halls and opera houses from Milan to Philadelphia for 40 years. The prospect of seeing and hearing him conduct a reunion of what must be the musical world’s greatest diaspora of talent certainly created a frisson. The program, on paper at least, seemed unambitiously mainstream: Brahms’ Second and Tchaikovsky’s Fourth symphonies. However, on closer inspection, it yielded far more interest. Both works could be called Romantic, both were composed virtually contemporaneously by composers who were also near contemporaries. Yet Brahms and Tchaikovsky were both, emotionally and idiomatically, polarities.

Muti was a Young Turk, who succeeded Klemperer as Chief Conductor of London’s legendary Philharmonia Orchestra. He was renowned for rhythmic precision, Italianate intensity and whiplash attack, among other qualities. Only a musician of Muti’s stature could meld almost 100 musicians who normally perform in a wide range of music ensembles with varying stylistic requirements into not only a viable, but virtuosic, whole. It was fascinating to experience his reading of the opening movement of the Brahms: in what must surely be his sunniest symphonic movement (pace Sir Simon Rattle’s bizarre attempt to say otherwise during an interview preceding a 2016 London Proms performance with his Berlin Philharmonic) Muti gave one of the most leisurely performances I’ve ever heard. It was languorous and luxuriant but never indulgent or sluggish. No one can ‘hide’ in this music and every section acquitted themselves nobly. Significantly, Muti included the exposition repeat, which, like its equivalent in Schubert’s last Piano Sonata, D.960, recalibrates the entire movement and at this tempo, makes it as long as the three subsequent movements combined. Once you’ve heard the repeat in a performance of this calibre, any performance without it sounds truncated. The only trace of melancholia comes in the Symphony’s slow movement where the cellos and bassoons and syncopated woodwind in general distinguished themselves. In the third movement, the pastoral oboe contributed gorgeous pinpricks of sound. The ebullient proceedings of the final movement were a joy to hear as the entire orchestra sang in a final triumph.

In the late 70s and early 80s, Muti produced a Tchaikovsky cycle with the Philharmonia, which, 40 years later, is still highly regarded. This occasion demonstrated he’s lost none of his energy or panache. What he displayed was a masterful command of musical pulse: how to establish and vary it, in the often neurasthenic convulsions, conflict and spiritual turmoil of the difficult first movement. The opening trumpet “motto” theme was played curiously legato but with brazen insistence (as it was whenever it recurred throughout the work). In the second movement, the oboe solo was especially exquisite. Muti did a huge ritard at the end, but it worked. In the pizzicato of the third movement, the strings deserve special praise, as do the woodwind and brass in their piquant interjections. The manic gaiety of the “Russian dance” final movement brought great energy and drama, while, all the time, not managing to dispel the image of the “Sword of Damocles” hanging over the composer.

This was one of the most exhilarating concerts I’ve attended in a long time and another eloquent reassurance of the eminent place of Australian musicians in the world.