For the revelation of the plaque dedicated to Maestro, the band “Blasorchester der Musikschule Deutsch Wagram”,  Infantrieregiment Nr. 42, played for him. Then he had fun conducting the musicians.

The Golden Johann Strauss Award has been granted since 2013 from the Johann Strauss-Gesellschaft Wien (Johann Strauss Society Vienna), a politically independent association dedicated to the preservation of the Strauss compositions, as well as the Viennese dance and operetta music in general. The company was founded in 1936.

The Golden Johann Strauss Award is presented to famous personalities who feel it as a need holding the famous Strauss music in honor and interpret this music internationally. 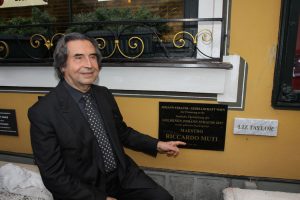 The plaque dedicated to Riccardo Muti.